At Hydroblast we use small and nimble machinery to navigate even the most hard to reach areas for line removal. We remove both termoplastic and white lines and can be called out anywhere in the country.

Case Study Rumble Strip – Not Up To Standard

The location: A595 Parton to Lillyhall dual carriageway, which bypasses Distington, Common End and Howgate.

The new bypass was completed, but could not be opened yet. This was because there were problems with alignment of the road markings, which would result in danger for drivers on the road if it was not rectified.

The white lining contractor had taken away the raised part of the rumble strip, leaving behind a ghostly outline.

Our experienced operatives were brought in to clear away the remaining parts of the rumble strip, clearing the way for the new road markings to be applied.

As the road surface was solid and brand new, we could turn up the pressure on the Trail Jet to 2000 bar pressure. Our operatives combined this pressure with a consistent forward walking movement for steady, efficient removal of the lines.

This work was carried out in the dead of winter, meaning that we only had a few hours of daylight in which to work.

Our progress was also affected by snow and frost. However, due to our experience in these kinds of tasks and our well-maintained, powerful equipment, we were able to successfully remove more than 8KM of stubborn rumble strip.

The work was completed on time and left the client with a clear stretch of road, ready for the new markings. 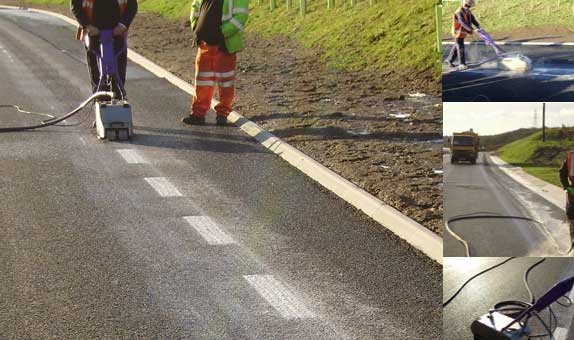