Concrete Cutting with a Hydrodemolition Robot: Cutting Square and Round Holes 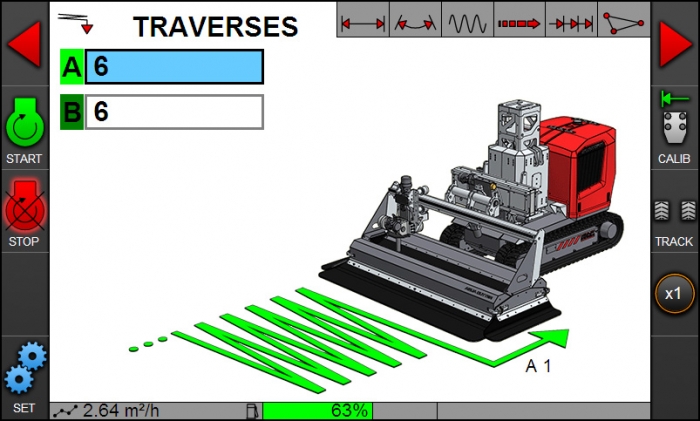 High and ultra-high pressure water jets are renowned for their ability to effortlessly cut through concrete cleanly and precisely. Recent advancements in water jet technology have improved concrete cutting possibilities yet further, enabling geometric shapes of all sizes to be cut at a variety of depths in the same overpass. These tasks are made possible thanks to the Aqua Cutter 410A Evolution robot and its innovative control system, the Aqua Cutter Evolution 2.0. 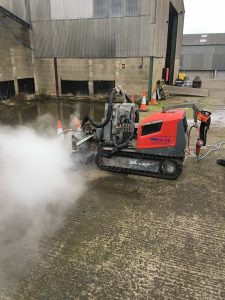 The Hydrodemolition Robot Cutting through the Concrete

What is the Aqua Cutter Evolution 2.0 Control System?

Described as the ‘most sophisticated and flexible system on the market’, the Aqua Cutter Evolution 2.0 control system allows the user to programme hydrodemolition robots to complete advanced concrete cutting tasks. Predominantly, this smart system is used to control water jet robots to cut shapes such as circles, triangles, squares and rhomboids into concrete surfaces. These shapes can be chosen either from the options available and adjusted as required, or can be drawn onto the surface using the robot’s teach-in system.

Cutting Square and Round Holes in a Concrete Factory Floor

Projects often don’t go to plan. During times like these, Hydroblast is called out to solve the issue and get the project back on track. Recently, Hydroblast did just that, rectifying an issue where a very expensive piece of high-tech machinery would not fit into the concrete floor, despite the machine manufacturer drawing up floor plans and the ground worker following these plans as instructed. To remedy this issue, the ground worker drew up new floor plans and contracted Hydroblast to cut 22 square and 30 round holes into the 250mm concrete factory floor. It was imperative that these shapes were cut out accurately and efficiently to ensure that the machine was installed quickly and correctly.

To accomplish this task, Hydroblast entered the geometric shapes into the Aqua Cutter Evolution 2.0’s on-board computer. Once programmed to the client’s specifications, the hydrodemolition robot, using ultra-high water jet pressures of 2500 bar, proceeded to cut perfectly clean square and circular holes into the concrete floor. 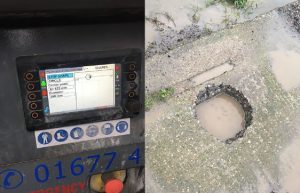 Why Use a Water Jet Robot Over Other Forms of Concrete Cutting?

Other forms of concrete cutting, such as jackhammers and hand lancing, would not have been suitable for this type of project for several key reasons:

Hand lances and jackhammers are operated manually, leaving the task vulnerable to human error. Conversely, hydrodemolition robots can be programmed and operated via a control system, ensuring the highest level of precision and accuracy time after time.

Unlike other forms of concrete cutting, water jet robots are able to remove sections of concrete without damaging the structural integrity of the surface.

Hydrodemolition robots are incredibly versatile, capable of cutting concrete on several different surfaces, in all kinds of environments, in a variety of shapes, sizes and depths.