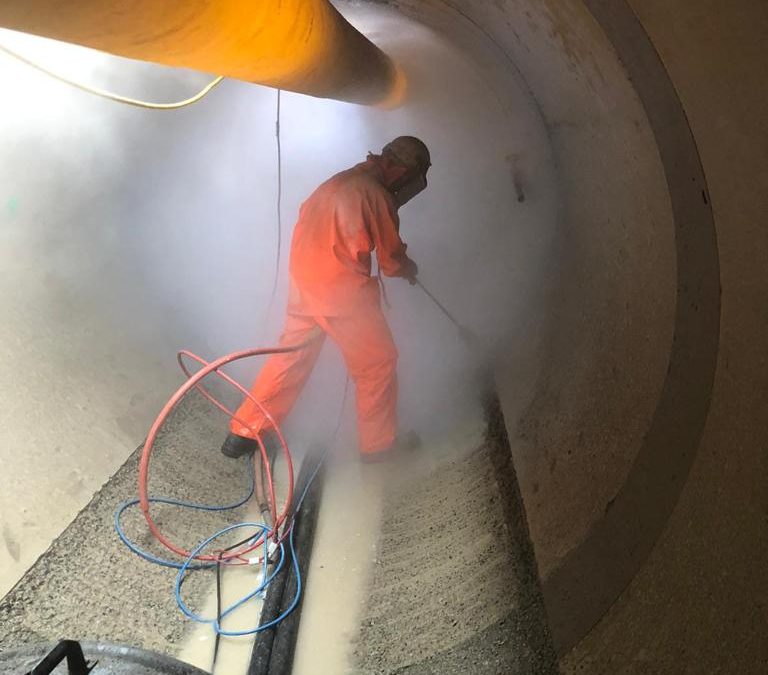 Civil Engineers working on the new 25km London Super Sewer, required a section of the precast concrete tunnel scabbling last week by UHP water Jetting. The tunnel was over 120m in length and had an internal diameter of 2.2m,10 metres underground.

The surface needed to be at least 15 mm in depth roughened for the new material to adhere to.

The construction company had already tried a Pneumatic Floor Scabbler, which proved to be noisy and difficult to operate inside the 2.2m tunnel. This method was very slow and was not leaving an even finish as required by the client.

The surface of the concrete needed to be roughened to allow the Fosroc Nicobond -EP to be applied.

Concrete Scabblining to several sections of vertical walls were also required preparation. These were added to the original scope, time allowed these to be completed due to the efficiency of the process being done using ultra high-pressure water.

Multi orifice Rotary nozzles with various configurations were used up to 2800 bar with a Hammlemann jetting trailer.

Working inside the tunnel had its benefits. Temperature’s outside were over 30 degrees, a rarity for UK Whether in the month of June. Fans were used to allow a cool flow of air to remove steam and allow visibility to the operator.

Using flows of around 20 liters per minute, generated waste waster of silt and concrete. As a result of this, the wastewater required treating. The portable unit is capable of holding 5m3 of water at one time and has its own own board computer that automatically controls the CO2 used to treat the water.

The water was pumped from the tunnel into a Sediclear Wastewater Treatment plant, before being disposed of safely.