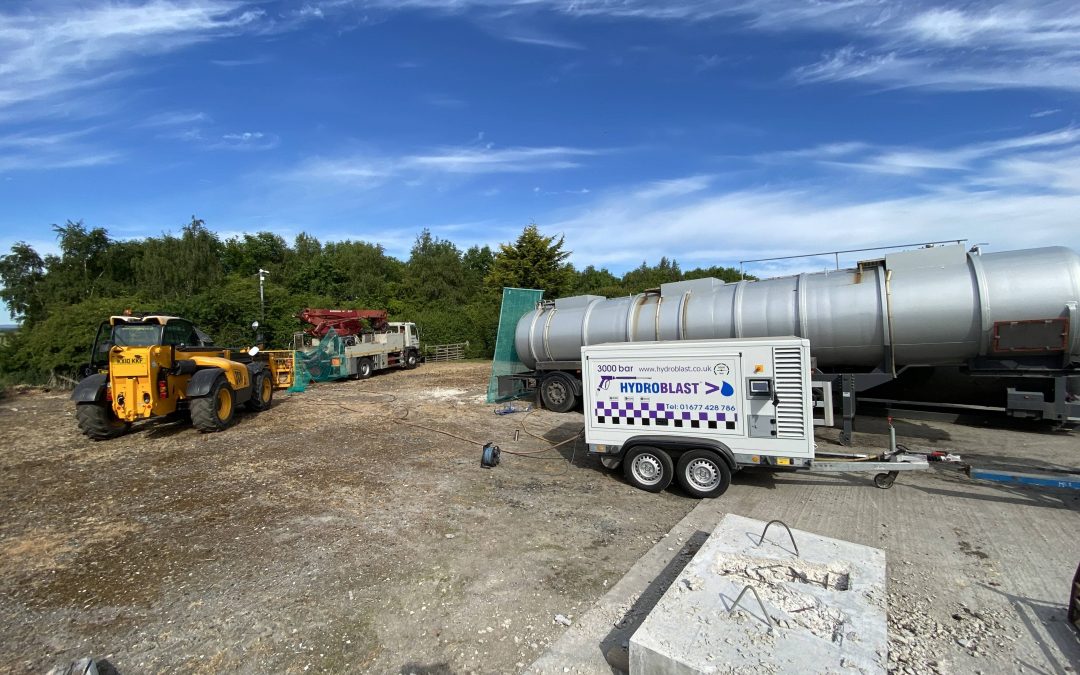 Last week we received a phone call from a concrete pumping company who needed our help, and fast, to unblock their Putzmeister Concrete Pump.

Their Putzmeister Concrete Pump had unfortunately suffered a failure with its hydraulic system, which resulted in the pump coming to a complete stop and the concrete setting inside the machine, deeming it potentially a write off.

The client could not let this stop them from working so they left the damaged concrete pump in our safe hands while they carried on their project with a hired in replacement.

As the machine was still driveable, it was dropped off with us at our Head Office at Gatenby and our skilled operatives set to work on it straight away.

How did we unblock the concrete pump?

Starting firstly on the blocked hopper, we used a Hammelmann UHP pump running at 2600 BAR, 20 L/Min and a Demjet Pencil nozzle. This worked perfectly at removing the blockage.

Once the hopper was clear we then moved onto the pipes, for this we used a Gopher nozzle to cut the concrete, using 2800 bar 28 LPM, that was inside before then flushing it out with a badger nozzle.

We have put our knowledge and experience to effective use once again as the machine was collected shortly after it arrived by another happy customer.

Not unsurprisingly happy as this could have been very costly if the pump could not be saved, not only would they have lost this machine but also have the continued hire of the replacement machine to pay.

Hopefully, they can now fix the hydraulics and get the machine back onto site.

This is just another example of how Hydroblast Ltd can resolve your problems within the required time scale. In this case as soon as possible.

So, if you have a problem than needs our help, give us a call!